Design a site like this with WordPress.com
Get started
Skip to content
anawadhboyspanorama Uncategorized June 27, 2018June 30, 2018 6 Minutes

In the concluding part of my writings on an exemplary an adaptation and standalone work as RUKMAVATI KI HAVELI, I had to furnish my moot points regarding its technical achievements. They add coherence to this minimalistic work, with its grand scheme of things governing the internal politics of these individuals and giving it a certain horror and urgency. It’s the realities behind such ancient doors and walls of customs which persist to this day.

First and foremost credits for art direction are to be disseminated to SAMIR CHANDA and his team. It’s a closely coordinated set with earthy, white-yellowish walls decorated with elephant motifs signifying the prestige of its royal antecedents and the complacency of status it accords to those occupying it. We get the sense even within its limited spaces used that it is a huge mansion and somehow it achieves the feat of cramped dampness that calls for negligence of the sisters’ view of the world at large. Closely appropriating the play and its sparse, spare stage design, the film set is like a glorified cell where the four walls may not have lost their sturdiness and the structure its height ( as havelis in Rajasthan are) but it’s an old spot and a faded, burnt quality to it is there without an ounce of unnecessary glamour. There is no release from it. Rukmavati is in her prime here but it’s a far cry from the heyday the monument of her pride has seen. The period of mourning and her own widowhood have only made it sombre. 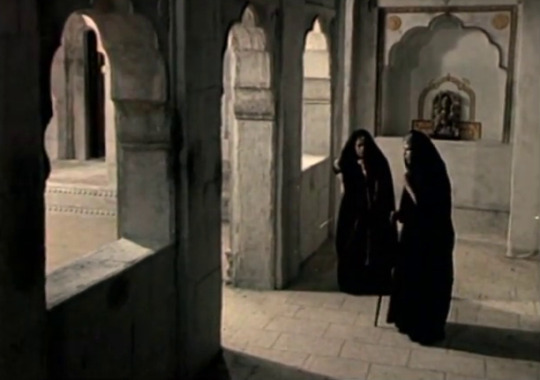 The background score has been omitted ( which can be such a nuisance when overdone, hammering the point of a perfectly still scene) here so natural sounds like bells ringing in the temple of Goddess Bhavani within the home and the gleeful singing of fieldworkers who the women view from their windows bring an element of disruption/continuity to the silent backdrop. The screenplay also lets these only be heard and not shown . Thus an aura of distance is created, crucial to understanding characters’ psyches. The latter brings a contrast to the sombre interiors as the sisters are amazed by the freedom of these men from the mountains while the former sound is as regards the culmination of prayer service for the departed patriarch. The sound of crickets round out night-time scenes. Kudos to Ajay Munjal and A. M Padmanabhan for dexterously handling this challenging aspect of sound in a script without the usual markers of it.

The actors’ prominence in the field of theatre further adds fluency to this space as they know how to restrain their movements and work accordingly. They are not new to this realm.

The cinematography by Govind Nihalani who also directs is top-notch throughout, with natural light diffusing the interplay of shadows and facial mobility of its excellent ensemble cast showcasing such dormant emotions. Take the opening shot where the Rajasthani tradition of Rudaali or professional mourning is invoked in the soundtrack by dint of Ila Arun’s vocals ( she belongs to Rajasthan herself and has beautifully upheld its folk traditions in the mainstream in its unadulterated form as in its contemporary fusions for over two decades). She is, incidentally, also a consultant on the film and rightfully so as she has the inside edge on her home state and its milieu and composed the lamentation she vocalises in its opening credits. Her arresting voice is steeped in the soil of this land and breathtaking are her breathy, sobbing pauses in between the lamentation. It will leave a chill down your spine. So exacting it is to the spirit of the play and this adaptation. Further phantom like cries of members of Surnai, who I reckon belong to the rudaali clan, bring an ominous wattage to the proceedings. When insulated in one space, we resemble figurative ghosts in the shell and this is how it is. There is the side profile of a woman in full black, with the veil covering her face and this haunts us as a visual. There is this almost surrealistic shot of Rukma and her daughters entering the quarters one after the other on the day of mourning. There is a raw, burnt quality to the camera work and they seem like ghosts entering their crypts. That is the prison sentence within the home that entails for each. Sisters cooped up, closely pressed together in an all black outfit is akin to a charcoal painting or an Amrita Shergill portrait. They have been frozen in time. The costumes by Arti Kalia and appropriate make up or the lack of it by Raju Chawan is commendably in sync then. 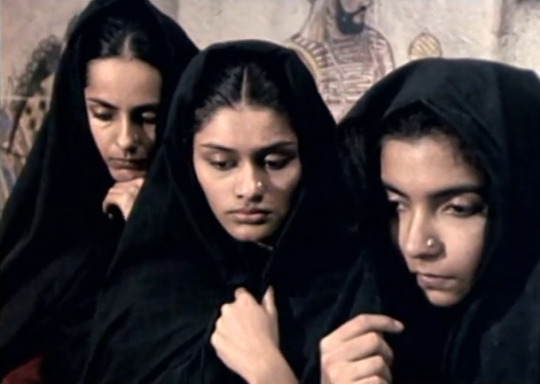 The dynamics of this female bonding in the film opens up a fraternity of shadows and mirrors too. The mirror of distorted, sullen realities is grasped by the viewer but here its literal use by the sisters is a play on the idea of appearances which again is a point of contention here. Savitri is dismissed as plain and sickly, Mumal feels her sickly comportment and lithe frame has defended her against any unwarranted male gaze while dark clouds under Damayanti’s eyes is singled out as an unattractive feature. Only Padma takes pride in her youth and looks and has no qualms about it. It’s a volte face from real life where all are extremely beautiful, graceful women who have honed their public life with tact and stayed true to their artistic leanings without selling out to commercial propriety of the entertainment world. Here, they eat their humble pie and actually pinpoint with accuracy the divisions that spring from this cult of appearance especially regarding women in a predominantly man’s world. Dhapabai also terms them as ugly when beneath their tanned, saturnine and covered faces, the shine of their individuality is never doubted.

It’s shot in close ups and in what can be termed as one extended long take. Cue the dance of desire on Mumal’s face as she uses her hands to arouse and awaken her innate feelings . It’s a powerful shot as is the one with Padma playing with the diya. The hands are prominent here too. This scene is like a phantasm as the room is pitch black ( except for the diya), closer to the fate ordained for her towards the climax as also her realization of love for Nahar Singh. The skipping scene with Mumal, Chandra and Damayanti is the only instance where all of them replenish a sense of joy.

There are symbols too as of their domesticated male horse in heat and a neighboring girl publicly and mercilessly shamed for delivering an illegitimate child ( both audibly present and not shown). Rukma’s wielding of her stick also is symptomatic of her singularity as when she beats Savitri who doesn’t protest. In later scenes, Mumal prevents her from using it to manhandle her while Padma breaks it, symbolically marking the individuality of each of the two and passage of a rebel coming into her own against her decreed silence.

A discussion between Dhapabai and Rukma regarding the men blatantly taking the local whore outside village limits for their entertainment is symbol of the social categorization and the world of males and those ‘fallen women’ who come within its ambit. They (both the men and the woman in question) are deemed as outsiders as the original brood of the village doesn’t confirm to such moral malaise and social trespasses. But the complexity within these strong willed women implying a general societal hypocrisy is unveiled. First when Dhapabai tells the sisters about sending her own young son to a woman – a local dancer and whore perhaps – they disparage as it’s natural for a male of his age to quell his needs. Second is when Rukma takes the rifle to shoot Nahar in the climax. She narrowly misses him and talks about “a natural orientation of women having weak targets” . But still there is no hint of weakness in her as her furrowed brows and proud comportment are held intact. However, these are thoughts and complexes conditioned in their psyches, coming down to them from centuries altogether.

The climactic gun shots then sound like a crack of lightning and a primal scream goes out by Dhapabai as Padma meets a dead end, with all the agency of a Shakespearean tragedy. It’s here that Rukma breaks down in between her spells of stoicism, still mouthing her trademark ‘khamosh’ (quiet) and all its concerns come to a disturbing moment in time. All the technical aspects of filmmaking bring us to a standstill and a point of grave assessment. Reality never leaves the room.

RUKMAVATI KI HAVELI haunted me and even as it unveiled layers of female desire long before it came into currency, it showed the universal mirror of all times in its dissection of conservative powers that be and stifling of self definition. Watch it. It will gnaw at your soul. It’s a collaboration that spells the gloom of worldly strictures extended to the point of no return.

** BELA BHANSALI SEGAL (editing) and SUTAPA SIKDAR (scripting) are among the female anchors of this gem who have gained more traction in recent times.