Design a site like this with WordPress.com
Get started
Skip to content
anawadhboyspanorama Uncategorized January 18, 2019February 18, 2019 6 Minutes

The following, hence, are the four major works that were released and they imitated ground realities in engrossing multiplicities, casting some of the finest minds and performers. Comprising of limited series, films and an ongoing, critically acclaimed series, the works defined versatility by the minute in each case .

Born in a cricket crazy nation and to a father who runs one of the most recognized cricket academies here (albeit I have never played the ubiquitous sport and have zilch technical knowledge), I knew my attention will automatically veer towards this six part, half hour series on Netflix. The thing with cricket or any popular culture specimen is that an universal attuning to its presence far outlasts your limited knowledge of its ins and outs.

So while I served the purpose of making my father watch it via the flexible streaming format, I settled down to its brisk paced journey with equal enthusiasm. With an half an hour format, six episodes went by in a breeze and the build up was necessary for upcoming seasons, given it’s based on Aravind Adiga’s novel. It’s akin to the head rush and emotional toll of a game of cricket, with those on the field and following the action outside turfs.
After all, it has one of the most potent premises in the dual / joint tale of two brothers who chase their individual dreams while being ruled by the diktats of a helicopter parent. I mean, who doesn’t want to follow two siblings as they battle the crests and troughs of an uber competitive, unpredictable terrain?

Rajesh Tailang is excellent as the kind of disciplinarian, one dimensional bully that fathers more often are than we would like to admit. So intent is he on making stars out of his rigorously trained boys that he admits at one point that he even selected their mother based on her sporting genes. But that’s no ruse to hide the ballast of their own unfulfilled dreams that they heap on their ‘child prodigies’ Here the village to city beat is a smokescreen for all we know and parse about sudden transformations.
It lets us in on the class structures within the universal metropolis of Mumbai, from the rich businessman (Karan Oberoi) displaying a flair for spineless business practices and only English language endemic in the upper echelons in India to the principal of a St. Xavier like school( the prized Ratna Pathak Shah) who still promotes equal opportunity even if her funds are drying up. Legacy of integrity is what she stands for while the cricket coach ( Mahesh Manjrekar) has the predictable beat of familial burdens and some past slight to go concurrently with his reputation as an expert in the gentleman’s game. The idea of burgeoning sexuality has been teased too in the script. The boys’ father’s toxic masochism has also been left in the residue for what’s to come in the next season.

SELECTION DAY has a novelistic breakdown, down to the use of magic realism as when the younger brother converses with the God figure. For the duration of the show in its back to back run, it interested me and handled a kaleidoscope of emotions without being overt. A coming of age tale with class and gender politics thrown in, it looks at the game through the prism of youth and some fine, realistic performances.

A gun toting army officer in a hijab is an interesting conceit that can easily get lost in scattershot execution. In GHOUL, an internationally endowed Indian Netflix original, the three part structure holds the horror template firm, replenishing its tropes of silences pregnant with doom and mystical beasts manifesting in antisocial human behavior. An allegory for our intolerant times where the majoritarian government holds reins of freedom of expression and the very principles of sedition are dictated by vested interests, it takes place in a covert army base.

Prisoners charged with sedition and other crimes are locked in this perpetually wet, dank, claustrophobic space and religion too enters the fray. It’s topical and the interpersonal interactions sustain the tension and dread put on display.

Radhika Apte, a towering talent, is the glue to this atmospheric enterprise while others like Ratnabali Bhattacharji, last seen in WAITING (2016) as Kalki Koechlin’s friend and agony aunt, and Manav Kaul are competent.
The most interesting aspect of GHOUL is in how it upends authority that basically brainwashes even the righteous and turns them against their own, as reflected in the patriotic protagonist, played by Apte, as she gets riled up against her own professor father, who it seems, is propagating anti national decrees. The moral grey zone uplifts the horror here. It’s predictable but executed well and its topicality and open ended, ambiguous ending is propulsive enough.

Also it’s a treat to watch veteran actor Sajjad Zaheer in a pivotal part. Apte is left, right and center in GHOUL and ensures we are riveted. This miniseries is a change in pace from the laughable creature features we have been led to watch so far.

Boasting one of the most robust ensembles of all times, this on screen recreation of Vikram Chandra’s sprawling Mumbai saga has fallen in right hands. The versatile, gritty and uncompromisingly say it as it is approach is the first time Anurag Kashyap and Vikramaditya Motwane’s joint talents have opened up the wealth of storytelling, narrative equilibrium and verisimilitude to my discerning mind. They never rise above the setting and fractured humanity of the people portrayed here who are centralized in their lowest nadirs ; hence the roster of memorable characters who cross each other’s paths against extreme yet compulsively complex tracks of the law.

Real life is the crowned king in this eight part series’ first season and has single handedly blurred the limits of artistic freedom between mediums.

I also appreciated the way faith / religion is integrated seamlessly at several junctures, exposing its futility and omnipresence, such as an instance of chicken appearing in a staunchly vegetarian restaurant, extending the idea of cold revenge and the lead gangster hailing from the Brahmin faith right down to the 1993 Hindu / Muslim conflagration to an actress appearing as a deity in a popular mythological and getting enmeshed in a larger network of amorality in real life.
SACRED GAMES may be too brash to some but I found its individuality and place in the filmmaking pantheon to be exemplary. 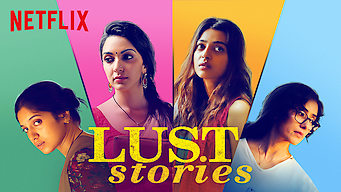 Don’t be fooled by the title. The internalization of the titular emotion is dignified on a larger platform to reflect forbidden desires in a matter of fact unfolding, over half an hour vignettes alloted to each tale. In this Netflix original, a four part collection of modern day heterosexual relationships, the central character of lust isn’t spelled out explicitly and it’s the most humane course of storytelling.

The viewpoints are relayed, women are revealed to be independent yet privy to self analysis, mute witnesses and given to hateful judgements by others when liberation is sought. In essence, each tale looks at a lop – sided heirarchy that finds ways in the modern era to set a leash on fundamental desires. Right or wrong, human interaction is always fraught with double edged polarities.

Among my two personal favourites, the agency of illicit alliances is handled with maturity and careful consideration in the segment directed by Dibakar Banerjee ( starring Manisha Koirala, Jaydeep Ahlawat and Sanjay Kapoor) while Bhumi Pednekar utters nary a dialogue and still bravely plays against type as the domestic help engaged in a clandestine sexual union with a smoldering middle class executive soon to get married, her employer, in the portion helmed by Zoya Akhtar. You can clearly understand their predicaments, the internal contexts of these people and a class difference dictating their choices. These are tales consigned to nooks of Chinese whispers or anonymity in real life and here they are looked at with a little light on buried facts that persist between two people.

On the other hand, Karan Johar’s final stretch with Kiara Advani and Vicky Kaushal is a satire on the kind of awkward beginnings for arranged marriages fueled by conservatism and the flip side emerges in a shocking u-turn while the first tale (by Anurag Kashyap) has our favourite Radhika Apte launching into interior monologues and breaking the fourth wall as she navigates a long distance relationship with an overseas based husband (an off screen presence) and unspooling complexities galore.

LUST STORIES focuses on words, actions and passive aggressions tailing book ends of relationships across stratas and mindsets hence the untitled stories. After Dus Kahaniyaan (2007) and Bombay Talkies (2013), it launches the varied stakes of a quartet or ensemble piece with clarity of vision.

As another strong suit, one of my favourites Rasika Duggal too makes an appearance with Bhumi and she is such a delightful presence.

## the upcoming posts will address both films and television series that were the best of a 2018 tableau.