Design a site like this with WordPress.com
Get started
Skip to content
anawadhboyspanorama Uncategorized January 6, 2020January 7, 2020 3 Minutes

True to my writings on films that I was extremely fortunate to have watched on the now defunct M. G. M. channel few years ago and which I have already documented here on this blog vis a vis many examples since 2018, I present to you my originally worded take on the cinematic version of E. M. FORSTER’S novel A PASSAGE TO INDIA. I had the privilege of reading the book in 2012 when it became a part of my college curriculum and it ended up becoming one of the all time favourites of this bibliophile.

All these years later, it feels relieving to share its concerns in a culturally destabilized time where the boon of globalization goes hand to hand with xenophobic tempers operating on so many different tangents. As the wisdom of ages goes, great literature and cinema are truly sans frontiers of a particular period, holding both a contemporary pulse and an unique foresight . The underlining message is that humanity goes through transitions of socio- economic hues but essentially remains the same when it comes to interpersonal interactions and the works.

So here is my original writing dated 30th August, 2014, in turn inspired by the writing project based on a reading of the book and its structure that I had undertaken in 2012.

“Shrines are fascinating, especially when rarely opened” – with this ambivalent quote at the beginning of the book, this writer, like most of the 20th century consciousness, entered E. M. Forster’s enigmatic lair of imagination informed by bare facts. True to his form, the much eulogised novel A PASSAGE TO INDIA threw open floodlights on a historically bona-fide documentation of society where cultural and by extension racial mistrust choked progress of personalities.

Forster’s impartial meditations find cinematic traction in David Lean’s take on the debt of that history, set in the Victorian heydays of the Indian subcontinent.

To me, this screen adaptation is potently relevant to this date to dynamics of a multicultural milieu and like its source text has quietly and gracefully withstood the test of time. The ethos of pre – independence everyday dramas and interpersonal bonds find a subversive, realistically fleshed out and still intimate voice in Lean’s vision. Usually, he is known for his epic scale of filmmaking but here the sprawl of the human mind is his primary focus. He deftly captures sounds, smells, sights and movements of people who are wedged on two opposite sides of the spectrum. Yet intertwined by their sheer sense of humanity, they sail on stormy water, seated on the same precarious boat. (this literally becomes an important image in the novel)

As a viewer, one is bound to ingest every minute detail of the film’s setting Chandrapore. Essentially a cultural manifesto, Lean structures A PASSAGE TO INDIA like a classic whodunnit where the central sense of mystery stirs an interior monologue on the fine lines that distinguish illusion from reality, trust from incredulity.

In its initial segment of the three dimensional arc, good tempers between the compassionate and practical Mrs. Moore (Oscar winner Peggy Ashcroft) and the ever dependable Dr. Aziz (an excellent Victor Banerjee) strengthen our beliefs in the shared bonhomie amongst them, the so called colonizers and the colonized respectively. Then like a bolt out of the blue, its second act alludes to the rupture in this timely development that breaks the very foundation of trust. The geographical and physical aspects of storytelling occupy as much space here as the mental contours of this tale’s central ‘victim’ Adela Quested (subtle Judy Davis) 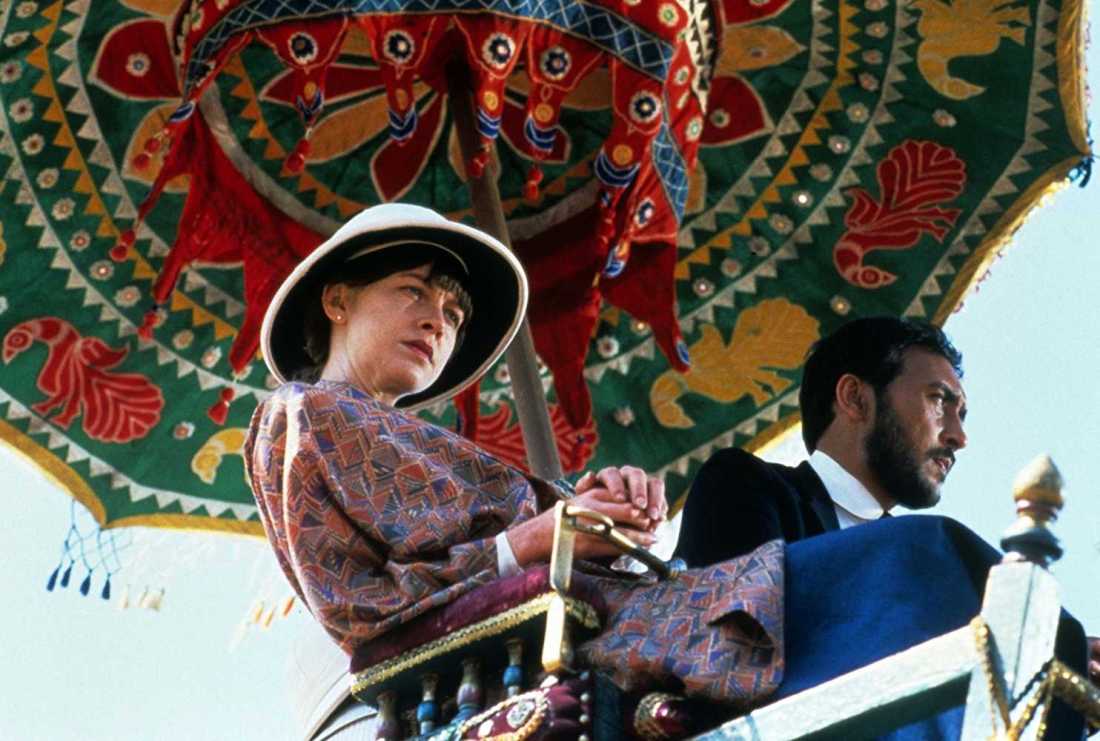 On her part, Adela is a naive and reserved English lady who is infatuated with the idea of exploring an exotic land, little knowing about the ins and outs of the place that are in store for a stranger like her. Equal parts inquisitive and reticent, she is engaged to Mrs. Moore’s son Ronny( Nigel Havers) , the local District Magistrate. She is in two minds about settling in a loveless marriage coupled with the dominating nature of her betrothed. It helps that Aziz’s charm engages her emotionally. A close reading of the prose material will render Lean’s faithful handling of the subject matter credibility.

An apprehensive visit to the majestic Marabar Caves gives this tale its conflict and it’s a morally ambiguous one. Trust and the nature of truth tail this location with all possible layers of complexity.

NOTE : In the next post, I will continue from here to avoid jamming each strand of my writing in one capsule so as to not exhaust readers’ interests .