More cinematic experiences means the impetus to write about and articulate those images, making them find clarity in the readers’ mind and allowing them the opportunity to watch and explore the titles. In many cases, this exchange of ideas ends up being cherished for a long time.

So here I am, once again sharing my views on some challenging, provocative and thought provoking works. Diverse in treatment, the message in each is borne from complexities of real life. Read this post to know more. The good thing is, both films talked about here feature one of my favourites NATALIE PORTMAN. 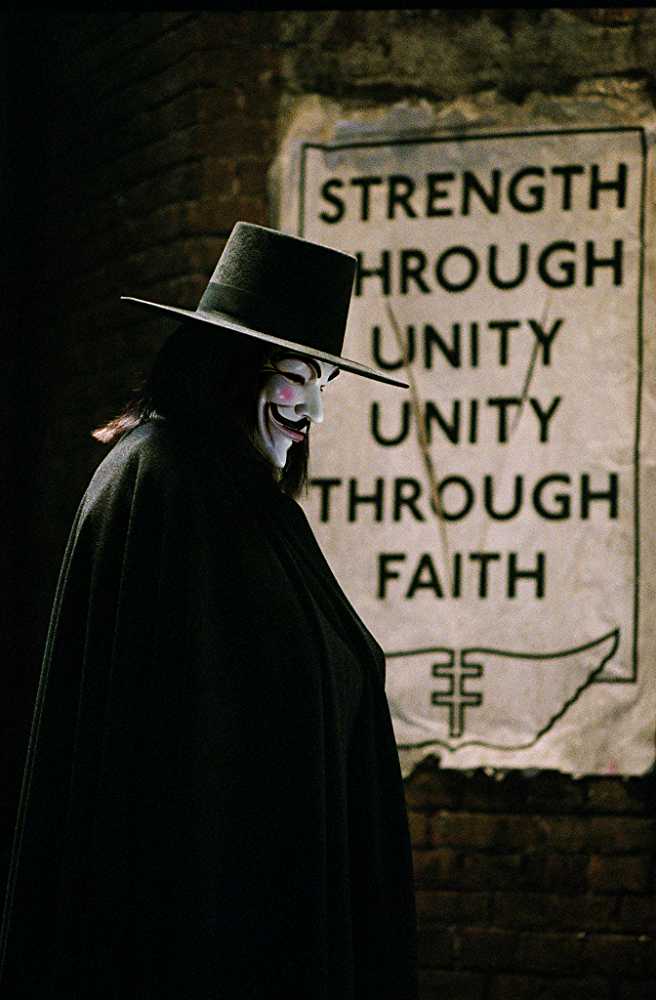 This was such a popular cultural specimen back in 2005 when I was a newly anointed adolescent and its Guy Fawkes mask wearing protagonist and unanimous critical praise within Indian publications itself established a permanence of being. So many years later I finally watched it. V FOR VENDETTA succeeds in maintaining mainstream appeal and yet it can occupy a niche of its own. Its title is the very basis for the fire and brimstone tone at the heart of its revolutionary social matrix.

Written by the Wachowski siblings who rewrote every rule with their Matrix trilogy, V FOR VENDETTA is about two individuals who rise up against a totalitarian regime, in a future world where America has fallen and England is the last bastion of power. Sounds like those times when the island nation had literally ensnared half of the world in its imperial fold. This implicit topicality works well for it. 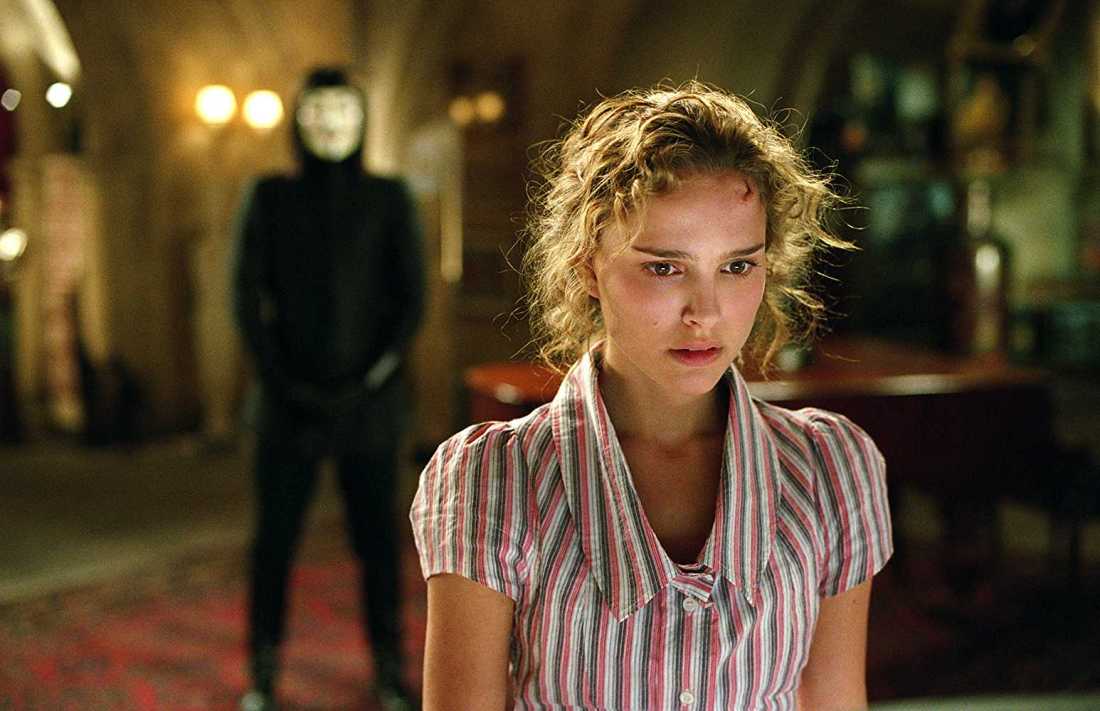 Yellow vest protests, anti Brexit din and uprisings in Khartoum, Sudan, Israel – Palestine infractions, this tale resonates for all of these current crises. V(Hugo Weaving) is a symbol of protest, of the unaided voice and collective of the common man who speaks out rather than bending the knee to the powers brainwashing one to blind subservience. Evey (Natalie Portman) is initially within confines of a violent, patrilineal order in which she has to be rescued by the vigilante one night. Together, their implicit and explicit sense of individuality collide to give momentum to this tale.Given the many acts of counter violence, is it stoking terror imprints, we ask. The complexity of it all is there as a strong current. It is actually propulsive, with its pro change ideology fitting desperate designs of the present and coming future. To me, the design of the screenplay is a direct salute to Guy Fawkes and countless other freedom fighters who graced the living world.

Hugo Weaving then has a Shakespearean flourish as V and the verbosity never comes off as pedantic in his masked presence; his is truly an unique performance as he never shows his face . The weight of his voice carries the film splendidly as well as his physical agility. It implodes with a concurrent charge, with the background score being tuned to those sensations. Natalie is the point of view character and she does full justice to this pendulum swing from delicate resignation to fearlessness. However, her spirit is always in the democratic berth even before she grasps V’s iconoclasm.

On the other end of the spectrum, the late great John Hurt as the despot who speaks through a huge screen is hugely effective here.

Within this narrative, a lot of empathy is generated for people of all hues who are on the margins as when Evey is in the prison and reads about them through letters jotted on tissue papers . Her bald head and torture as part of the imprisonment is enough to chasten us. V FOR VENDETTA speaks directly to anyone in throes of conflict which is why it is so relevant. V and Evey are, essentially, resistance fighters canvassing for universal suffrage. 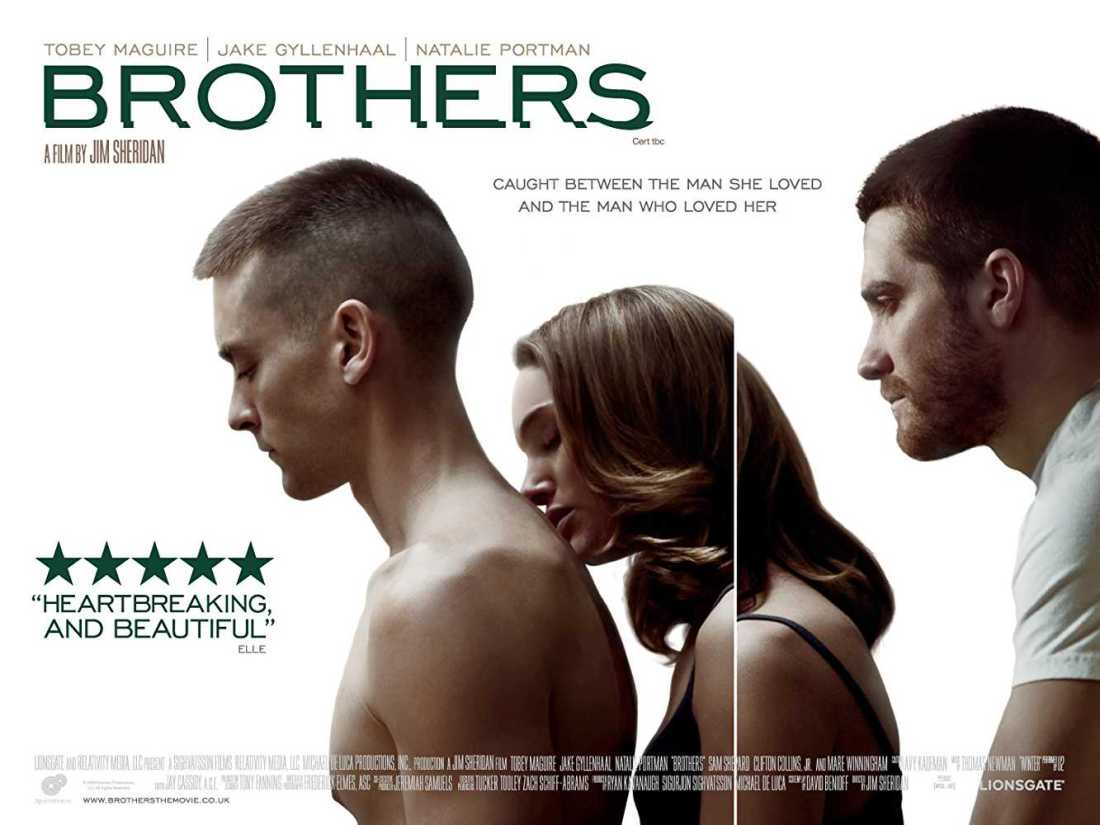 Susanne Bier’s dramas have an optimal slow burn within domestic settings. Be it THINGS WE LOST IN THE FIRE, SERENA and even BIRDBOX, the phenomenal 2018 success. BROTHERS (2009) is based on her original Danish film of the same title. One needs to know that the Oscar winning Bier juggles handsomely between her native industry with such works as AFTER THE WEDDING and IN A BETTER WORLD as well as English language works that includes the television miniseries THE NIGHT Manager. A penchant for multiple arcs and personal characteristics of people interests her and BROTHERS revels in those concerns.

The directing duty passes on to Jim Sheridan here. While I haven’t seen the original, I can say the man in charge of the English language adaptation does a decent job. It’s just that nothing actually holds one by the scruff of the neck until the important volte face in the second half. The implosive action in the latter parts is genuinely, emotionally stirring. 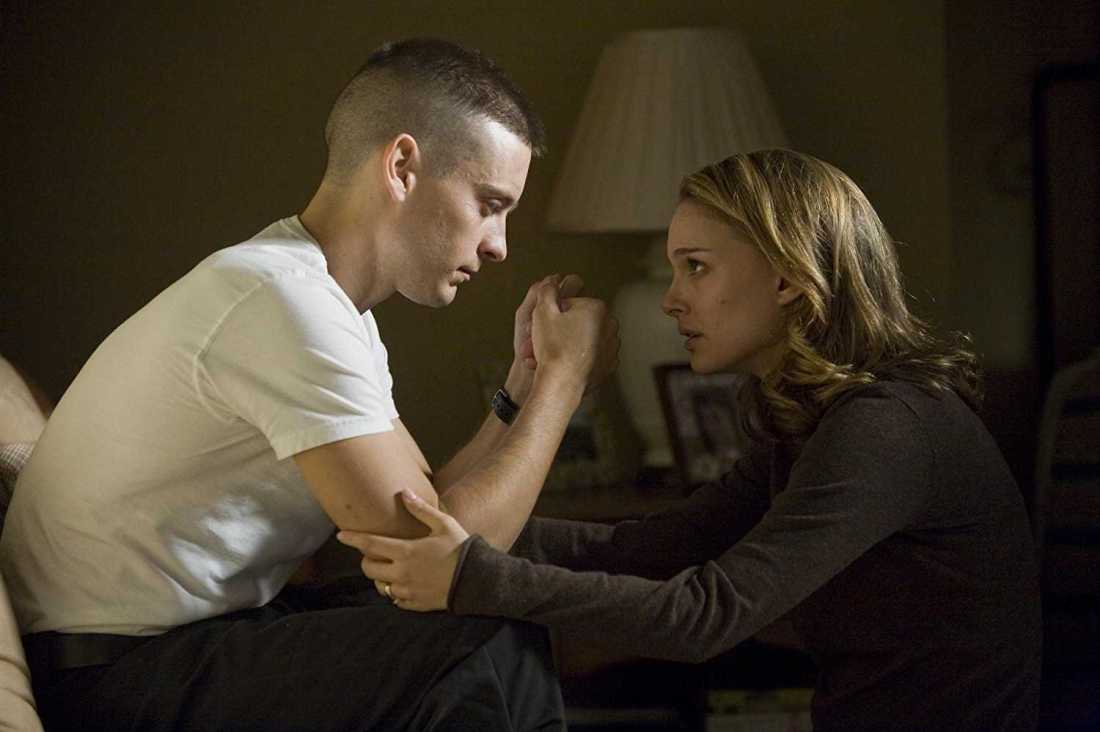 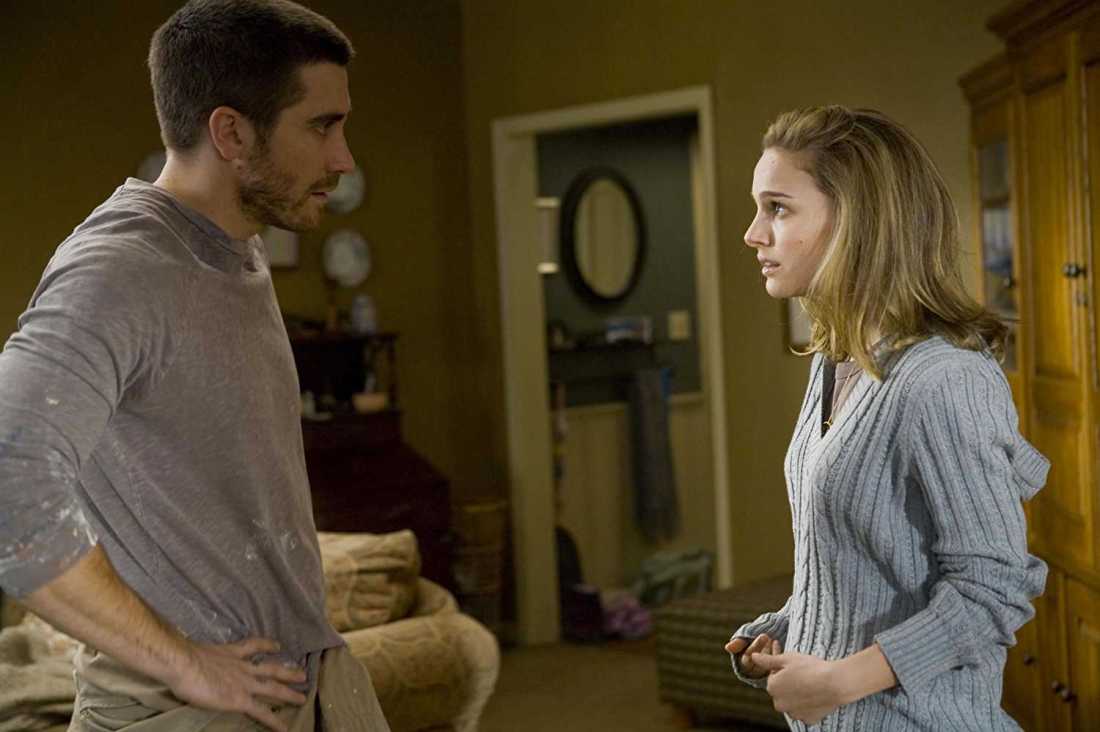 The ‘action’ hence is concentrated on the homefront as an armyman (Tobey Maguire), who has been released by the Taliban after months as a prisoner of war, comes home to realize that his inner darkness has unspooled to every corner of his soul. In the time he was pronounced dead, his once irresponsible brother (Jake Gyllenhaal), now reformed, and wife (Natalie Portman) have drawn closer. His own doubts add fuel to the fire. Plus no one really wants to commit to him, now that he is a ghost in a shell, one who came back from the dead into a pattern of things that had been reset in his absence. The duality of human nature is explored here. Even a token brand of compassion eludes the ones closest to him. Distance becomes his refuge. Above all is the unruly triangle that the brothers and the lady of the house are caught in. The mature script will not allow neutral viewers to point out the wife as being in the wrong or the brother to be an opportunist or that they jumped into an ‘almost there’ attraction a little too soon because they resist and bond for the sake of the two kids.

BROTHERS is about the bond shared among parents and children too as in the fraught one that Jake shares with his father ( played by the legendary Sam Shephard) who uses the elder brother as a reference point to contrast the younger one’s transgressions. It seeks empathy for the better aspects of one’s being. Mare Winningham adds good support here as a confidante of the family who lets better sense prevail when the men lose track of things. Carey Mulligan shines in a solo scene where the grief of a young widow is expressed with her usual non – exhibitionist gravitas.

It’s like walking out to an eventual minefield. This is where the sparks of Susanne’s Midas touch is replicated and the slow burn comes to define the film as a complex character study. Tobey Maguire adds pathos to his eternal Good Man image wherein his anger, frustration and sheer helplessness becomes extremely heartfelt and internalized.. . He has undertaken harsh decisions to survive, with a gun held to his head. He is a tough soldier who serves his nation and own moral obligation. But underneath it all, he’s human, distressed and a gentle soul attempting to come out of the days that have besieged his mental unraveling.

There is a scene where his older, pre adolescent daughter (Bailee Madison) makes a shocking declaration at the dinner table and this should be absolutely alien to an Indian experience as the child precociously, under duress, tells her father about the sexual nature of two adults’ mutual relationship within the family . The lack of an emotional understanding towards veterans returning from warzones with PTSD is another poignant reminder of compromised empathy.

The War at Home scenario is a tangential progression of melancholic properties here as a national hero is reduced to ashes within the constricting domains of the world that wants him to be ‘normal’ with a snap. He has seen too much. Borne the burden of massacring his compatriot as dictated by his captors. Held guilty within his own tribunal of the mind. 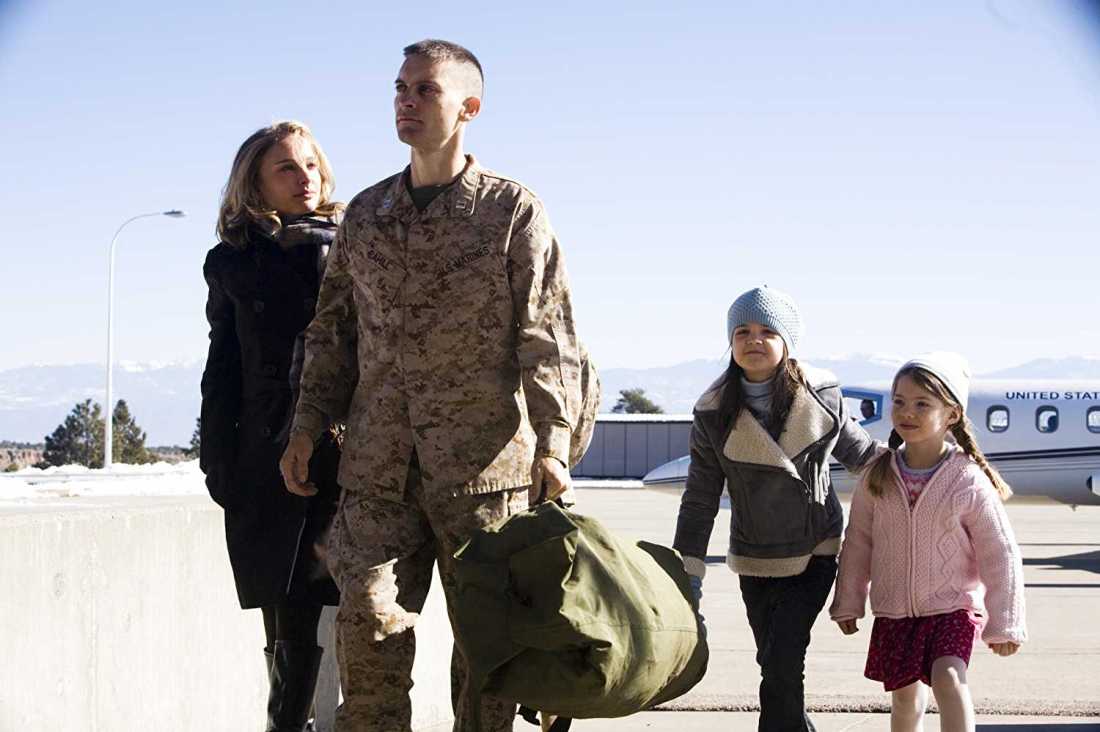 BROTHERS is too elemental for atleast the first half. But by the end, Tobey alone makes us commit to the profound struggles of those suffering from the aftermath of traumas beyond their control. 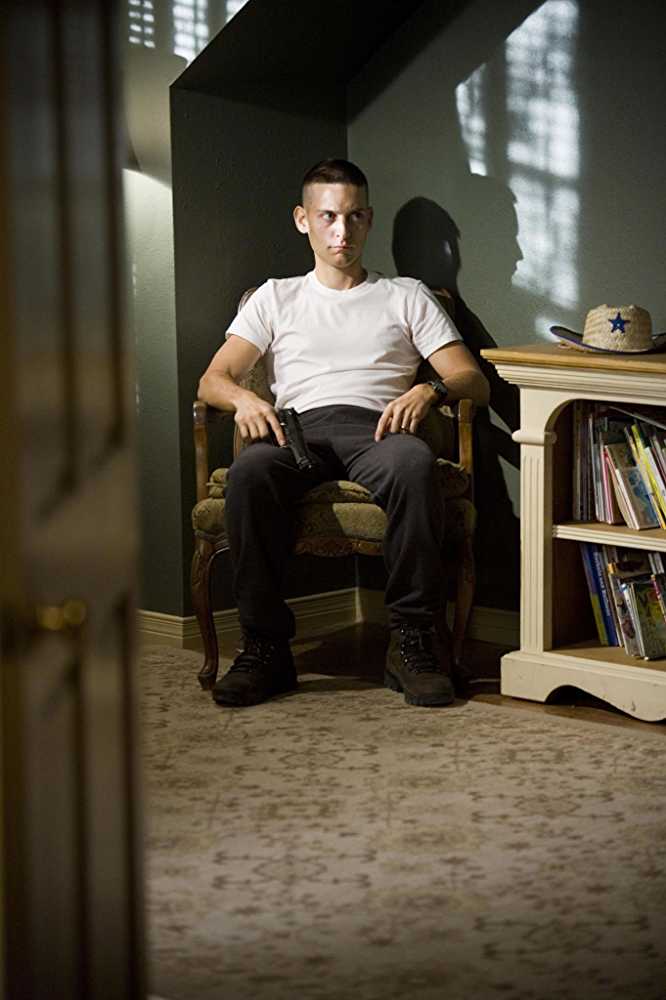